Artworks by Alberto Argenton
in the exhibition “L’occhio in gioco” 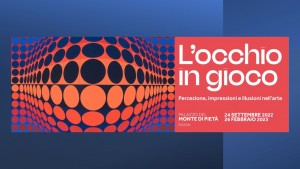 The exhibition “L’occhio in gioco” (Trick of the Eye), open until 26 February 2023 in the Palazzo Monte di Pietà, Padua, is curated, in its first, historical part of a historical nature, by Luca Massimo Barbero and, in its second part, focused on the Paduan reality, by Guido Bartorelli, Giovanni Galfano, Andrea Bobbio and Massimo Grassi.

The exhibition is organised by themes and documents different perceptual-representational devices used by the artists in their pictorial research, relating them to scientific research on vision.

The second part of the exhibition, included in the celebrations for the 800th anniversary of the University of Padua, is dedicated to the study of perception developed at this University since the foundation of the Laboratory of Experimental Psychology in 1919, and presents three scholars, Cesare Musatti, Fabio Metelli and Gaetano Kanizsa, considering their research – on stereokinetic movement, phenomenal transparency, and quasi-perceptual margins, respectively – and linking it with the production of a group of artists from the optic-kinetic current, Gruppo N, who worked in Padua between 1960 and 1964.

The thematic section on Fabio Metelli and the phenomenon of phenomenal transparency presents, in addition to studies by Metelli and works by artists of the Group N, works by other artists, including an artwork by Josef Albers and two artworks by Alberto Argenton, who also dealt with this phenomenon both in his scientific research, initially under the guidance of Fabio Metelli, and in his artistic research, experimenting with the corresponding perceptual-representational strategy in the numerous variations that characterise his artistic works.

The two works by Argenton in the exhibition are Oval with 4 elements and ‘Devil’.

To the figure of Alberto Argenton is also dedicated one of the essays contained in the volumes accompanying the exhibition, which Laura Messina Argenton, Tamara Prest, and Ian Verstegen wrote upon the request of the event’s and book’s curators: Alberto Argenton and his research paths: Psychology of Art and Painting.

Information on the exhibition here https://www.palazzodelmontepadova.com/en/locchio-in-gioco/