A Dantesque excursion with Alberto Argenton as guide 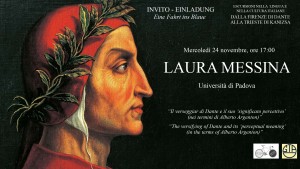 In 2021, on the occasion of the 700th anniversary of Dante Alighieri’s death, the Trieste members of the GTA (Society for Gestalt Theory and its Applications) offered a series of online, monthly “excursions”, held in Italian, on the “question of the language” in its various aspects: linguistic, psychological, philosophical and historic-cultural.

The tenth excursion was led by Laura Messina-Argenton, Senior Scholar of the University of Padua, on the topic: “The versifying of Dante and its ‘perceptual meaning’ (in the terms of Alberto Argenton)”.

The recording of the lecture is available at:  https://www.youtube.com/watch?v=hDLtewLfxgM

Lecture abstract: Francesco De Sanctis would suggest to his students, if they wished to “enjoy” Dante: “read him without any commentary, with no company except his own, and paying no attention to any meaning but the literal. Rely on your impressions, and above all to your first, which are the best. Later you will explain them, you will educate your taste…” . Had he been a psychologist of art (of Gestalt and Arnheimian matrix), perhaps De Sanctis would have understood “literal” particularly in its phono-morphological acceptation and would have referred to the “perceptual meaning” of Dante’s verses. And perhaps Dante himself would have agreed. My contribution takes up from Alberto Argenton’s studies the distinction he made between “perceptual meaning” and “representational meaning”, in reference to the visual arts, touching on his arguments about the primacy of perceptual meaning in the enjoyment [fruizione] of the artworks, and proposing inquiringly, but with a certain support offered by Dante, that it may have similar relevance, notwithstanding the differences between the media, in the enjoyment of his versifying.