Theme and Variations by Alberto Argenton

How do my pictures, my works, come about? In psychological terms — ability and implied faculties — and in the sense of procedure — phases, techniques and methods — not all that differently from how they come about for anyone, — through a creative process, something that has characteristics of use and function: a wrought-iron gate, a formula for statistical calculations, a gastronomic dish, a puzzle, a metaphor, a work of art.

That particular way that intelligence is manifested, which we call creativity and which finds its highest expressions in the sphere of art and science, is found in all the activities of man who, using his cognitive resources (i.e. what he has learnt) through strategies (processes of perception and representation) and forms (symbolic systems) of knowledge, conceives and carries out something new, unusual or surprising, which arouses wonder, interest, appreciation, pleasure and emotion.

Basically, what is common to these different products of creative activity is the fact that they are all the result of a psychophysical effort. They bring about states of self-satisfaction and are perceptible. What distinguishes these products of creative activity is that the motivation behind them, the materials and instruments they are made with and the functions they have occur within a certain sphere of behaviour rather than another.

Of course, even where there is no invention, all these elements are more or less characteristic of any type of human activity, whether it be frying an egg or writing an article, as I am doing at the moment. Both of these activities, indeed, presuppose certain phases, techniques and methods, and imply certain abilities and faculties. They require the use of resources, strategies and forms of knowledge in order to be carried out. Once they have been carried out, they arouse satisfaction — as a result which is felt as being worth effort. They are carried out because of motivations, with materials and instruments, and for functions relative to a certain sector of behaviour, in this case, cooking and writing an article.

What characterizes my work-action — my creation of images — is, therefore, the fact that the motivations behind it, the materials and instruments used to execute it and the reasons for its coming about occur within the sphere of artistic behaviour, in the world of art. I presume, I imagine and hope that it is the result of creative activity, carried out in the graphic-pictorial field, with “self-remunerative” and “aesthetic” intentions — i.e. to please myself and then, perhaps, others.

My work comes about through what I am, through what I have seen and know of the world, through my elaboration of the stimuli that surround me in the ambience where I live. It is the result of my cognitive style: my particular way (genetically and educationally determined) of elaborating information (the stimuli that reach me from outside) through the faculties of perception, memory, conceptualization, language and reasoning.

At a certain point in my life (very early, I must say) I felt the need to translate some of these elaborations into pictures and I was given the possibility to do so; I was able to start to practise my abilities early and thus to develop my knowledge and organize it in this form of language, seeking to master its techniques. This is how my creative activity, or rather, my research in painting started.

The act of elaborating and executing is very similar to that of solving a problem or verifying a hypothesis. 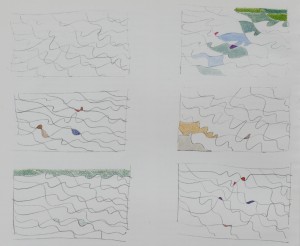 My problem is to represent (by signs, colours, forms …) the idea, the concept, the emotion, the event, the object (that my environment suggests at the moment) in the most suitable configuration, i.e. in the configuration that most corresponds to the mental representation, the mental image, that at a certain point comes into my head, of that idea, that concept, that emotion, that event or that object. As soon as I can, I sketch it on a piece of paper.

This is the moment of inspiration, not in the sense of ‘ ‘the suggestion of some feeling or impulse, especially of an exalted kind”, but in the etymological sense of “the action of blowing on or into”, of the action of bringing forth the essential nucleus of the work in its finally perceptible, embryonic form. The representation, no longer mental but concrete, of the idea, the concept, the emotion, the event and the object that have suggested it to me and which from now on I will call the theme.

This first outline is the result of my “perceptive reasoning”, of a mental process consisting of relating movement, form and colour. A reasoning based on the elaboration of stimuli that I have received, which have given me energy and activated my perception, reawoken my attention and memory, procuring sensations, images, visions, ideas, concepts and thought…

This initial moment is then followed by various intermediate stages before the execution proper of the work. There is a sort of research carried out, a graphical study of the representation, original both in terms of repetitive reproduction of its configuration and in terms of variations on that configuration, or in terms of chromatism, combinations and variations in the fields of colour.

This intense activity (which finds expression in the ‘studies’, using all kinds of pencils, pens, felt tips but also watercolours) gives me the possibility of having a dynamic comparison between the representation of the theme and the multiple representations of it, allowing me to master the form and giving me sufficient clarity to represent it mentally. 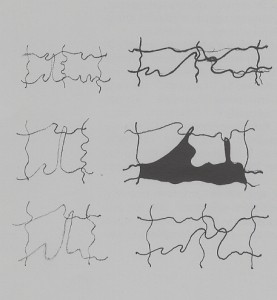 Then I am ready for the following stage, a stage which is crucial to my work. Having chosen the format and the type of surface to paint on and often in the case of oil painting, the colour of the tempera background with which to prepare the canvas, and after having put away my sketches, I again prepare to “blow on or into” the paper or canvas, transferring the framework of my mental representation onto it.

I do this with the utmost concentration. I am close to the solution of the problem which depends on this action that I usually carry out very quickly and which must not and cannot contain any mistakes (the technique I use does not allow for many corrections or second thoughts). The mental outline of the theme, through the mind, the body and one of its amplifying elements (the instrument with which I draw the signs) starts to come to life and manifest itself.

Now the work can start with the laying of the colour on the areas created by the crossed lines. When using watercolour, it is a single wash with a series of preliminary colour tests: if I’m using oil, there is a first, thick layer of distemper which reflects the final colour which will be given in oils, which has been experimented on strips of cloth and in small “studies”, until I get the right tonality, density and brilliance.

The principles that lie behinds my reasoning refer to certain basic concepts such as simplicity, softness, energy, strength, discretion, fluency, provocation, balance, limit, transgression, clarity, cleanness and asymmetry … Apart from the arrangement of crossing lines and their sinuous flowing movement which almost always reaches the edge of the canvas, the completeness of the work also depends on the colours and the way they are laid uniformly, with slight nuances, vibrant but not brilliant, intense but not heavy, provocative at times but never brazenly so. 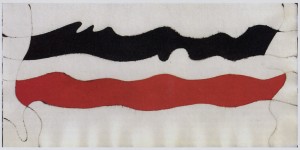 This last stage has moments of meditation in between the moments of activity. In activity, the sensations roused during the concentration on manipulation and use of materials and instruments are kinesthetic, tactile, visual and olfactory. In the moments of reflection, the concentration on gauging choices made up to that point is mixed with feelings of enthusiasm or dejection, apprehension or security, of gratification or dissatisfaction.

At a certain point the work is finished and for me it is like that moment when, after having etched a sheet of copper I pull out the specimen from the press and, after much trepidation, discover whether the work has come out as I wanted it to.

The works presented here, together with some of the preliminary sketches and studies, belong to a group of works carried out over the past three years, which I call, generically “stories” and “songs” (in the sense of “lyrics”) to indicate my attempt to “narrate” and “play” pieces of my experience of the world. 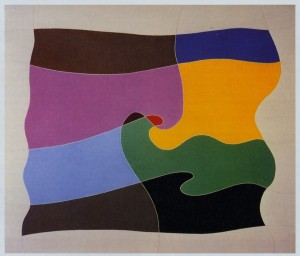 I usually give generic titles (“the mad chord”, “stories from life”, “imperfect reason”, “structurae”, etc.) to each group of works which represent themes and their variations having the same ‘narrative spirit’ and depicted according to representative concepts which are generated by similar or identical stimuli and referents.

The title often has a further specification. The “narration” takes on further meaning through the name of a place, the title of a song, a line from a poem, an aphorism. The “song” becomes a “love song” or a “dance”: “a satirical poem”, “copula”, “madrigal”, “flamenco”, etc. and so on, emphasizing the idea, the concept, the emotion, the event or the object that has given rise to the work or which has been part of the process.

Images, of course, need no titles to be understood but in my case, the fact of giving a title (which has a personal meaning) completes my “work-act”.